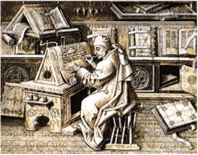 Three common types of mistakes in scribal practice—homoioteleuton (eyeskip of words, phrases, or lines); dittography (accidental repetition of words or letters); and haplography (the opposite of dittography: accidental omission caused by adjacent similar words or letters)—are familiar to those who study medieval manuscripts. Like textual instances of anamorphosis, these skips, stutters, and omissions fix us in place as readers, connecting us in a moment of pause with the all-too-human ghost that hovers behind the text. Carelessness, one imagines, bred of exhaustion, explains many of these scribal blunders. We picture the scribe, harried and hurried, toiling in a dim room at a desk surrounded by the tools of his trade: parchment, ink, books.

Then there are the “new” scribal errors wrought by technology. 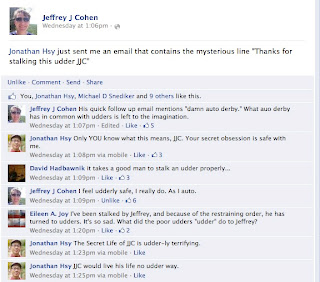 Print, digital publication, and auto-correct have proven every bit as error-prone as the human hand, leading to embarrassing and amusing blunders in their own right. In the pictured example, we see an online community of medievalists, friends, and scholars engaging in a game of one-upmanship in punning on the humorous mistake produced by auto-correct. The more serious question this encounter raises is whether we have outsourced the ability to make such blunders at all—is the evocative error that connects us with the medieval scribe severed and sealed off behind the digital scan, the pdf, the touch-screen? (And, coming soon, of course, the thought-screen.) 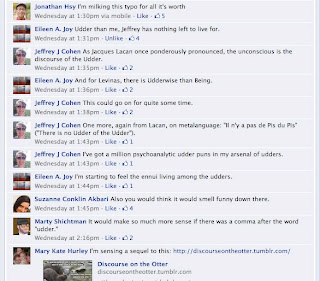 My interest in scribal transmission is driven by my work as an editor and publisher—I simply want to see what happens when a text is copied out by hand rather than produced via print or digital technologies. Bruce Andrews—a leading member of the first generation of “Language writers” to emerge during the 1970s—calls for a means of overturning perceived hierarchies in language and poetry. “The key,” he writes, “to see how best to involve or implicate the Reader” (capital R). He characterizes this opening of the text as “a move toward participatory democracy—away from the Author’s sovereign authority,” with the goal of “empowering” the Reader. “But”—he asks—“what kind of Reader could be empowered? And what kind of textual experience is best equipped to deliver or make possible this Reader?” While attending to the nuances and complexities of rethinking scribal practice—the de-romanticizing of the hand as a technology undertaken by Jonathan Goldberg, the confused and confusing gendering of scribal vs. print transmission explored by Wendy Wall, and the concepts of chirographic presence [1] and scribal communities that Harold Love and Arthur Marotti attempt to explain—scribal practice, and its attendant errors, seems a productive place to look.

For this purpose, I chose an unpublished manuscript by the late poet kari edwards, the “Joan of Arc” project, housed in the poetry archive at University at Buffalo. 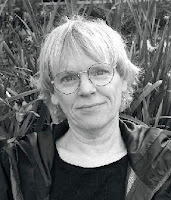 kari edwards [2], prolific and vocal as a transgender activist as well as a poet and artist, died of heart failure in 2006 at age 52. The Joan of Arc project—given the deliberately “unspeakable” title dôNrm’-lä-püsl—is described by edwards in a book proposal as “a reexamination of jehenne d’arc (la pucelle) … the story of la pucelle becomes only the framework for a language out of bounds, a narrative that is on the edge of consciousness.”

“Language on the edge” seemed a productive angle for the scribal project, especially given the added element of edwards’ difficult handwriting. Her book proposal includes a plea for funds to hire an editor, explaining that she is “severely dyslexic.” Written out in somewhat chaotic fashion in a numbered set of composition notebooks, the text provides a number of scribal challenges.

I set up a scriptorium at my table during the Buffalo Small Press Bookfair, an annual event that draws vendors and authors from around the country. 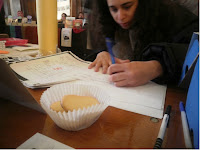 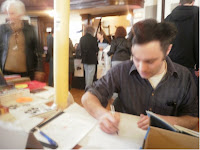 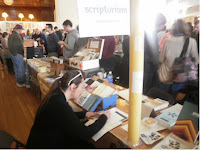 This fortuitously replicated at least the challenging atmosphere of a crowded, busy scriptorium. We know little about such spaces, but some 17th century witnesses describe “many scores of clerks” working to produce subscription newsletters (Love 125). As one can see from the images, volunteer scribes have limited workspace, and are surrounded by people talking and walking around them. They are both part of and removed from that public space: performative in the act of writing, but closed off in concentration. Scribes were given their choice of notebook pages to copy, as well as their method—they could attempt to render edwards’ text as accurately as possible, reproducing obvious misspellings, cross-outs, and arrangement, or they could edit and rearrange the text as they saw fit. Essentially, I wanted to give the scribes a choice between mimicking the amanuensis who first copied Beowulf, ignorant of Old English and accurate to a fault, or Grimur Jonsson Thorkelin, who knew just enough to make some emendations (Klaeber’s Beowulf xxvi).

With these pages in hand, I sought an opportunity to produce second- and third-generation copies of edwards’ text, to test the concept of chirographic presence and measure which mistakes might be carried over, and which corrected in the process. In the meantime, I discovered that some poet-acquaintances—Susana Gardner and Pattie McCarthy, of the dusie kollektiv and Dusie Press—had pursued a scribal project of their own. 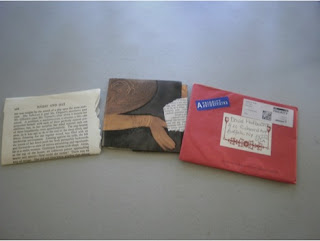 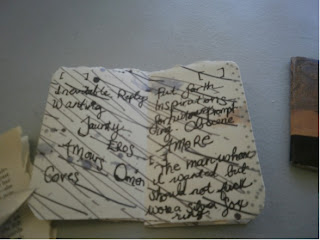 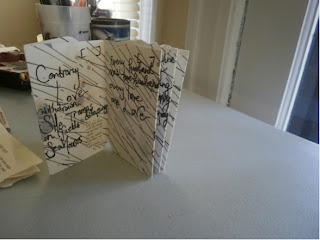 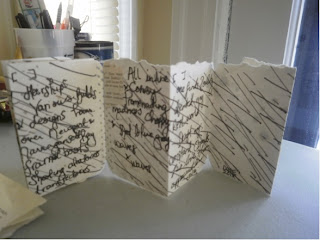 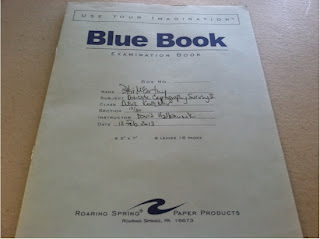 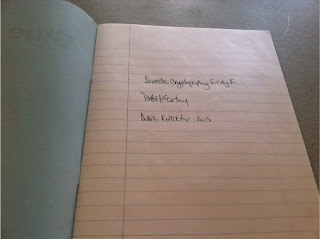 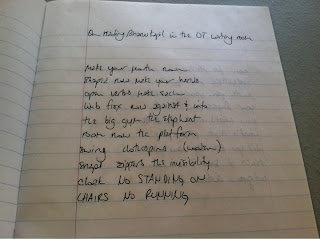 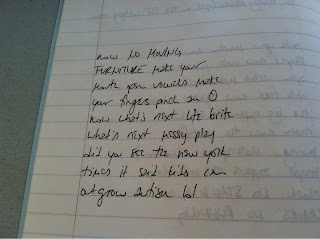 McCarthy engages in a hand-written process for reasons that dovetail with some of my own concerns regarding technology and community. “I wanted to handwrite those poems specifically in a sort of penitential way,” she reports, “like writing ‘I will not chew gum in class’ 100 times on the blackboard.” This calls to mind Goldberg’s characterization of handwriting as a “disciplinary submission,” a rote activity best rendered with as little variation as possible—one that also echoes strongly with the punitive tone of Chaucers Wordes Unto Adam—interestingly, in this case, a self-inflicted punishment. McCarthy adds that the poems were originally drafted as text messages to her husband and friends, as she sat in a waiting room while her son received occupational therapy for Asperger’s syndrome. Thus, “those poems are really fraught for me with questions about my son’s privacy … handwriting them made me think about every word I was putting out there.” Here, we might think of Love’s “scribal community,” with its dual functions of disseminating “privileged information” and “bonding groups of like-minded individuals” (177). The hand becomes a means of reversing the pull of technology—a retreat from the too-easy spreading of information, a return to restricted intimacy augmented by the difficulty of making out McCarthy’s script.

For the second scribal session, I chose the occasion of a friend’s end-of-semester backyard barbecue. Less chaotic, this atmosphere still offered a social setting in which scribes transitioned from a conversational circle to one of quiet concentration as they selected pages and copied them out. The aim was to produce a manuscript tree similar to the one mapped out by Ralph Hanna, based on Manly and Rickert’s scheme.


He writes, “Here O is Chaucer’s holograph, a text that likely resembled Shakespearean ‘foul papers’; O1 is the archetype of all surviving copies” (137). In place of O1 , of course, is my photocopy of edwards’ original. Given enough time, scribes, and scribal branches, one could generate enough variations that a reader could work backwards, reverse-engineering the copies in an attempt to arrive at an original, authoritative text. 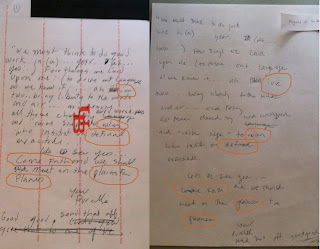 The scribe is immediately confronted with a number of cruxes: edwards’ handwriting, uneven indents and margins, seeming neologisms, uncertainty over spelling and word choice, crossed-out words. Scribe 1 has attempted to remain faithful to page layout, yet chooses to interpret at several points, and finally reverses the order of text at the bottom of the page, perhaps from having run out of room. 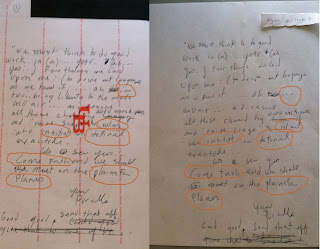 Scribe 2 adheres even more closely to edwards’ text, maintaining even pen-stroke similarity, cross-outs, and a misspelling likely caused by dyslexia or haste. 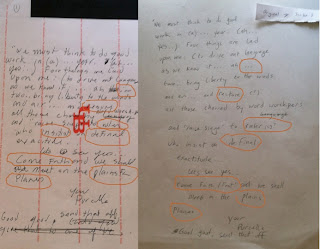 Up to now, what we might call the chirographic presence of the author’s hand, even in photocopy, has kept first-generation scribes from straying far from the original. 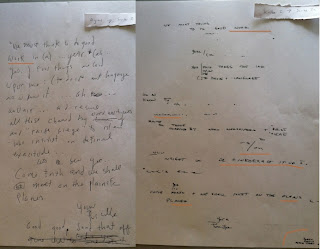 This second-generation scribe takes more liberties, employing the negative space of the page (perhaps suggested by edwards’ frequent use of ellipses), recasting cruxes as visual elements, poetically stretching the language and reconstituting words in ways that evoke edwards’ stated aim of making a “language out of bounds.” Moreover, for the first time, we must consider the materiality of the writing—here tiny, all-caps; and ink—a thicker felt tip or ballpoint—to the scribal process. The process resembles in miniature the transmission of John Donne’s poetry described by Moratti. It begins with the relative control of circulation among an “authorized coterie” (148), but moves outwards, away from authorial control (149), towards the “creative freedom that collectors and imitators in the system of manuscript transmission felt free to exercise” (153).

But the process is unpredictable. Scribe 3a feels free to reorganize Scribe 3’s line breaks, which followed edwards, into more syntactically logical units. Yet 3a retains 3’s uncertainty about some words, and creates a jaggedness on the left margin not found in the original.

Working from a different page of the text, Scribe 4 introduces an “eyeskip” type of error, missing a line midway down the page. Also, in an attempt to accurately render edwards’ own illegibility, the scribe creates interpretive difficulties that haunt future copies. 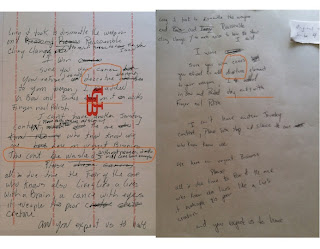 Neither 4a nor 4b, of course, can recover the missing line. By the time we reach the third generation, Scribe 4b, the look and language bears little resemblance to edwards’ text. 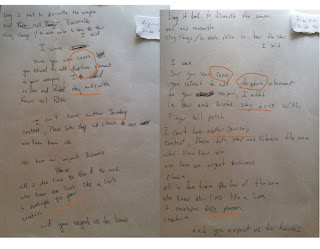 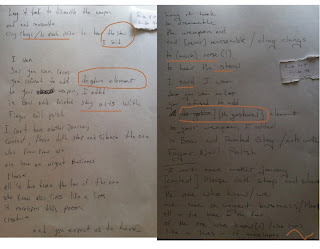 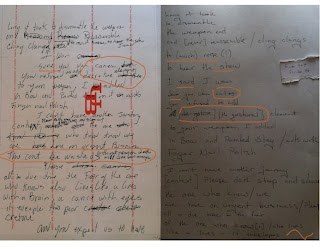 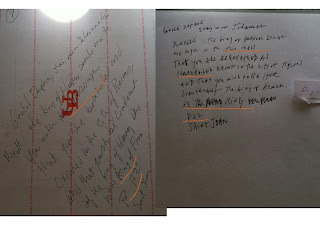 For the final page, Scribe 5 rearranges edwards’ slanted text, exacerbates some of the handwriting issues, and introduces new errors, shortening “message” to “mess” and inserting “hardboiled,” perhaps inspired by edwards’ writing of “bequeathed,” though that word is also copied.


Scribe 5a reproduces some of 5’s errors, but cleans up the presentation, and recovers “message” from “mess.” 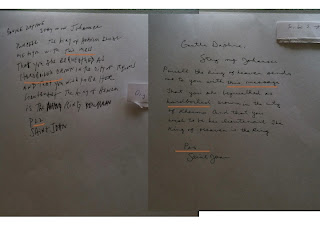 Again, the neat cursive writing and letter-format introduced by Scribe 5a, while markedly different from the original, suggests a likely way that this page might be laid out for print. 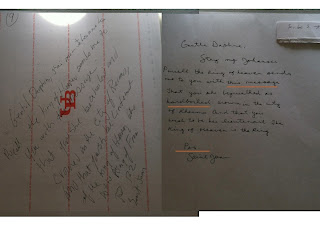 Conclusions
When Chaucer admonishes Adam Scriven, he not only establishes a top-down relationship between “making” and “writing” that persists through English literary history, he also expresses an anxiety: that the error might lie with the original, might be written into the original in ways that no scribe can ever correct. Chaucer, himself a professional bureaucrat subject to punishment for slips of the pen, responsible for keeping records in his own hand (Carlson 11), worries that anyone can change something at any point in the line of transmission. Errors level the playing field between author and reader in productive ways, ways that Bruce Andrews and other avant-garde practitioners often call for. Copying a difficult text such as edwards’ joan of arc, the scribe is thrust into a collaborative environment, making decisions that would all have been elided in a print edition. While worrisome and opaque, errors—their inherent presence in an original, and multiplication by the scribe’s hand—tend toward a kind of fellowship, individuation, and freedom, which I look forward to further exploring. 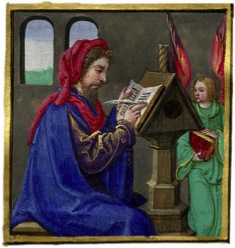 For that, I need your help. Pattie McCarthy has agreed to provide a chapbook length set of poems for scribal copying later this summer, to be published by eth press, a venture under the umbrella of punctum books I’ve undertaken with co-editors Dan Remein and Chris Piuma. I envision enlisting a number of scribes, with the aim of producing 50-100 handwritten copies of the book.  If each scribe copies out three books, he or she can keep one—or trade it with another scribe—and provide two for the scribal publication run. Together, we can produce new errors—new poems—and find out what happens.


[1] “Chirographical transmission represents an intermediate stage between oral and typographical transmission in which the values of orality—and the fact of presence—are still strongly felt. The written word is therefore more likely than the printed word to promote a vocal or sub-vocal experience of the text, and a sense of validation through voice…Derrida rejects both this priority assumed for speech and the ‘reality’ of presence” (Love 142). “The notion of ‘presence,’ whether or not regarded as philosophically sustainable, provides us with a method of discriminating between modes of signification as being more or less distanced from a presumed source of self-validating meaning” (Love 144).

Send us your academic fails! Email us at academicfailblog@gmail.com.

Have courage. Fail with us.